Fingerstyle! – Getting started with `ornamentation` when fingerpicking

Ornamentation is the process of adding extra notes to a basic idea. This can be done using a variety of means such as adding notes to the chord to increase its flavour, or using hammer-ons and pull-offs to fit more notes into the piece.

If you have a no frills guitar piece and you want to spice it up or add some interest or show-off stuff to the piece then ornamentation is a great way to go – especially when fingerpicking.

This month’s song video lesson of ‘Landslide’ by Fleetwood Mac has a little ornamentation in it (in the chorus) and because that song highlights that skill, and many others use it, we are spending this month’s ‘In Focus’ lesson looking at the skill in detail.

How do we add ornamentation?

The easiest way is to use the step by step process I’ll show you below.

I made the mistake when starting out with these ideas of cramming as much as possible into a piece using any means necessary, but this didn’t work. Instead the piece lost its groove which is the worst thing that can happen!

Instead of trying to cram lots into a piece, we will start off slowly and gradually add in more and more until it gets really fancy!

We are using a slowish tempo of 50 bpm for the slower versions and 80 bpm for all of these examples at the full speed.

In true fingerpicking style we are playing all these examples with a capo on the 3rd fret. This will make playing the shapes and changing between chords a little easier for most and brighten things up nicely just like the 60`s folk fingerstyle guitarists would often do.

For the first few examples it may sound a touch too slow but there is a reason for this….

By the time you see the last example you will see what I mean!

Don`t forget to put your capo on fret 3 for all these examples.

The Basic No frills Part

This is our basic no frills example. It is a simple Travis picking pattern and is the sort of thing you may have played before.

To play this pattern, first put a capo on fret 3 and then fret a C Major chord shape.

The pattern should be picked as follows for each example (the string name is in brackets):

If you have not played this sort of Travis picking pattern before, don’t worry as this is a simple pattern and one that with a little practice you should be able to get locked into.

Just take your time with this example as before we move forward it is key to get this pattern as solid as possible before moving onto the all the exciting examples ahead of us!

This is as simple as it gets with ornamentation but we don`t want to run before we can walk so this is a good place to start.

It’s on the high E string fretted with the pinkie.

Everything but this note is exactly the same as in the no frills example.

The easiest way to play this bar is to fret the C Major chord as normal but add the pinkie on the 3rd fret of the high E string throughout.

Now, we have a very similar idea but this time the pinkie is doing something slightly different.

The pinkie is now playing the 3rd fret of the B string instead of the high E string.

This actually turns the C Major chord into a more flavoursome Cadd9 chord.

This is a fun example as we combine the above two examples to create a bigger and better example.

Notice that this requires you to move your pinkie to play both of these notes.

Now we have a little step up in difficulty where we change rhythm and add a pull-off. Don’t worry, it isn’t as hard as it sounds.

Firstly, the bar is played as a conventional C Major chord but notice on the very last beat we are playing the high E string at the 3rd fret with the pinkie.

Once this note is plucked we pull-off with this finger. Pay attention to the faster 16th note rhythm this pull-off uses.

This example is very similar to the example above but this time the pull-off is happening earlier on in the bar.

The 1st fret of the B string is pulled-off to create the ornamentation in this bar.

Once you pluck this note, pull-off to the open string at this faster rhythm again before resuming normal service for the rest of the bar. Pay close attention to clarity and correct rhythm here.

Just like earlier on we have a fun example where we combine the previous two examples.

Now it is time to step up the difficulty once again.

If you are a beginner, I would definitely recommend taking your time and getting the above examples nice and solid first before tackling these tougher examples.

This time we are playing a hammer-on AND a pull-off on the high E string with the pinkie using a 16th note triplet rhythm.

A 16th note triplet sounds scary but just means there are 3 notes played where there would normally be 2 notes of conventional 16th notes.

If all that sounds confusing, fear not, rhythm is best listened to. Therefore, keep listening to the rhythm over and over and copy it as closely as you can.

Using the same principles as we did for the easy and medium examples we have once again taken the above example and moved the same idea elsewhere in the bar.

Oooh, this time we are playing the ornamentation on a bass string rather than a treble string.

Yes, that is possible and sounds very cool. It is still the exact same 16th note triplet as before but this time we are hammering-on and pulling-off the D string with the middle finger. Be sure to hold the C Major chord shape throughout.

This one sounds really cool and highlights why we need our tempo to be nice and slow. Imagine if we were playing this at a tempo of 120 bpm instead of 80bpm and 55bpm – it would sound crazy fast!

Firstly, on the D string – it is played open, then hammer-on at the 2nd fret and then pull-off to the open string with the middle finger.

The second ornamentation is played on the high E string – pluck it open, hammer-on at the 3rd fret and then pull-off to the open string all using the pinkie..

Keep the chord shape throughout the bar and keep a steady picking hand. You will need good technique to master this bar so don’t worry if you need to practice it super slow or over a period of time. Stick with it though – the benefits of learning a bar of music like this can be great!

Example 10 – Mixing it up for a real piece of music!

Now, as is what I like to do, I have taken some of the above examples and put them together to create an original piece of music and something like what you would hear in the real world.

The new chords are Am7 and G.

It starts off with the easier examples and gets harder as we move through the piece. Enjoy and challenge yourself to learn it all and play along with it. Just remember to practice with the slow example first and then tackle the full speed example. 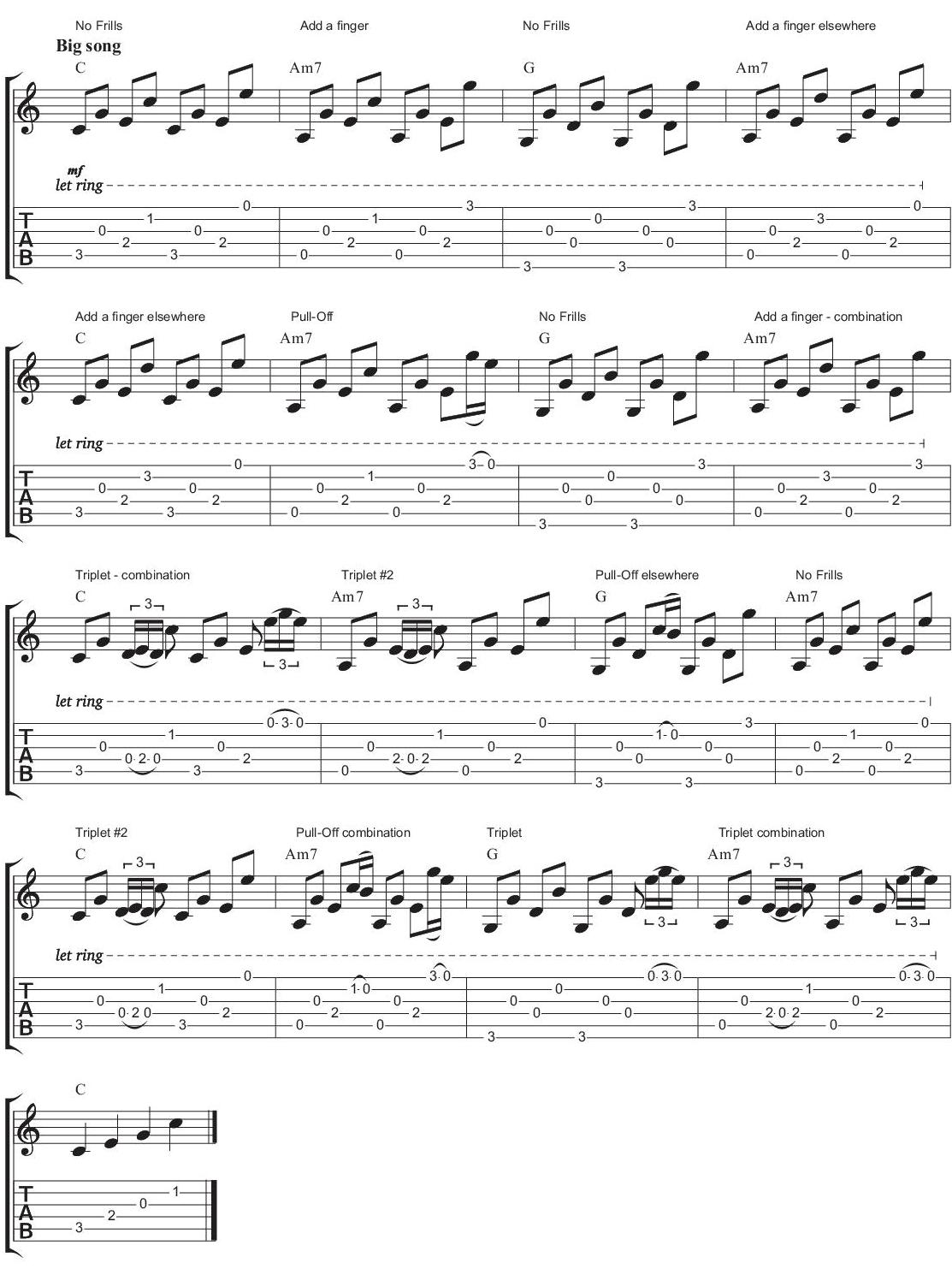 Most fingerpickers will use ornamentation at various points in their playing – particularly those who are above and beyond the basic playing level. Take a listen to the artists below to hear ornamentation in action on a fairly regular basis.